The Jaú National Park, with an area of 23,000 km², is the largest area of protected tropical forest in America. The park is located 200 kilometers from Manaus, capital of the state of Amazonas in Brazil.

This protected area in the heart of the Amazon basin is the refuge of several endangered species. This park is characterized by its rich biodiversity and is a recommended destination for all nature lovers and ecological tours. A unique opportunity to dive into the world of the Amazonian forest, between canopy, igapos and rivers.

The Jaú National Park (parque nacional do Jaú in Portuguese) has been recognized by UNESCO as a World Heritage Site for its rich biodiversity. This brazilian park was created as a result of a theory studied in the 1960s, when naturalists believed that the area served as a refuge for plants, birds and others, dating back to the Pleistocene period.

The park is considered one of the best examples of rainforest conservation in the Amazon. It is home to jaguars, manatees, sloths, monkeys, Amazonian dolphins, and many other animal species: 441 species of birds, 320 of fish, 11 of turtles, 4 of crocodiles, 120 different species of mammals, some little known and others threatened with extinction.
One can also observe petroglyphs inside the park as well as vestiges dating from the “rubber era”.

Location in the Brazilian Amazon rainforest

The park extends between the municipalities of Novo Airão and Barcelos, 220 kilometers north of Manaus, the capital of Amazonas in Brazil. The park is crossed by several rivers such as Rio Jaú, Rio Carabinani and Rio Negro. The park is located in the north of the anavilhanas archipelago. 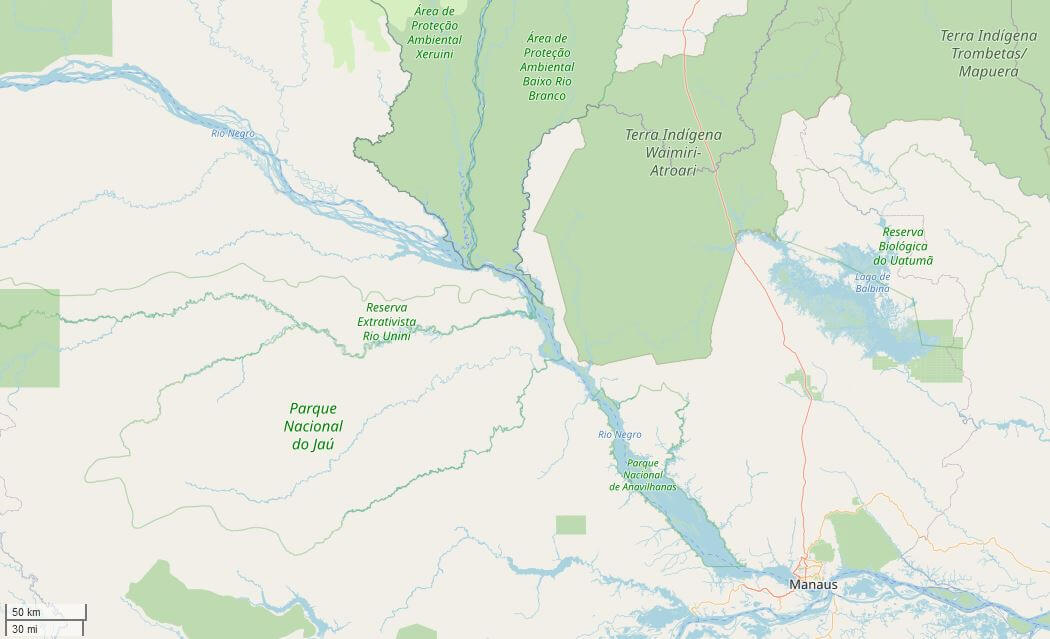 How to get to the park

Several means of transportation are possible to reach the park which is in the heart of the Amazonian forest to several days of navigations of Manaus..

From Manaus you can reach the park by river.

You can reach the entrance of the park by using traditional Amazonian boats with which it is necessary to count between 14 and 18 hours of navigation. You can also opt for fast boats, which will take between 5 and 8 hours depending on the weather conditions and the level of the Rio Negro. All the departures must be organized in advance, there is no permanent shuttle between the city and the park, you will have to prepare this trip in advance.

You can reach the park by air.

From Manaus you can hire a seaplane or helicopter pilot who will take you to the park. Count 1 hour of flight to reach the park from Manaus, nevertheless know that you will not have a boat to move once arrived on park, it will be necessary to have foreseen a boat in advance so that a boat waits for you at the landing.
There is no landing strip near the park, the closest real airport to the park is Manaus.

By road and then river it will also be possible to join the park.

It will be necessary to go by car or bus (4 hours of road) until Novo Airão, the closest town to the park. There is a road between Novo Airão and Manaus. From there you can take a boat to reach the park. You will have to organize in advance the departure by boat to the park because there is no regular transport to the park.

Entrance of Parque Nacional do Jau

It is necessary to inform the local authorities of your stay in the park in order to obtain a permit (which can be one day or several days).

This formality is mandatory, even for one person or for small groups of a few people who make a quick tour to take pictures and photos.

Where to sleep in the park

There is no infrastructure in the park except for communities that live in quasi autarky. It is therefore necessary to plan to sleep in the middle of the forest in bivouac type camps where you spread your hammocks under the canopy. You can also sleep on the deck of your boat by spreading your hammocks as is the custom in the Amazon where you can sleep in the cabin of your boat if it has a cabin of course.

History of the park

This national park owes its name to one of the rivers that crosses it, the Jaú River. The word Jaú is of Amerindian origin and refers to a type of fish that is very present in the region.

The project to create a unit for the conservation of fauna and flora began one day in the 1960’s. Several regions of the Amazon were studied by a group of biologists and the Jaú region was quickly identified as having a very rich biodiversity. At first, the region became a biological reserve and very quickly became a national park.

The park is distinguished by its exceptional fauna and flora but also by archaeological remains. Within the park there are numerous engravings of its first inhabitants, in addition to petroglyphs we also find remains of dwellings and Amerindian burials. During the discovery of the Amazon, settlers and Amerindians clashed on these lands.

This protected park is above all a haven of peace for nature, a refuge for the animals and plant species found there. For this reason, it is a privileged place to realize ecotours, you will be able to travel there and take your most beautiful photos. It is an obligatory stage of several days to put on your itinerary if you wish to discover the Amazon.

The 2 main seasons of the Amazon where the water level of the rivers varies enormously make that the park offers very rich and very different landscapes according to the time of the year during which you will go there.

Inside the park, 200 families of “caboclos” live from fishing, local culture and fruit collection. The largest community in the park is called Tambor.

From March to July, when the water level of the rivers is at its highest, you can navigate the igapo, and thus penetrate deep into the flooded forest with your boat. From the end of August to September, the water level goes down, so it is much easier to walk freely in the park without being blocked by water. At this time of the year, the lowering of the water level will also bring out petroglyphs, beaches and waterfalls that are submerged during the rest of the year. 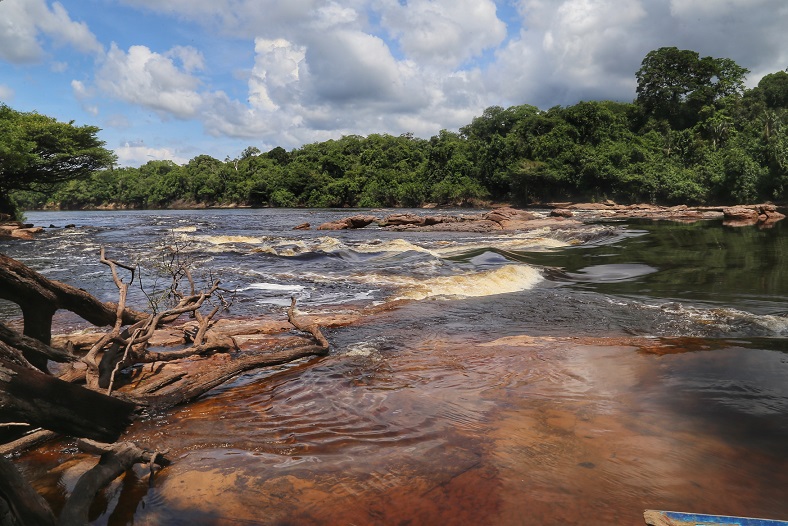 On the bordering parts of the park, some families live in a community called Velho Airão on the banks of the Rio Negro. This area bears witness to the great era of the “rubber” industry that made the fortune of Manaus in the last century, and the place presents a number of ruins from the eighteenth century, most of them very poorly preserved.

Remember that the park was initially created for the richness of its fauna and flora, so wherever you are in the park, you can appreciate the richness of the biodiversity of the place. Nature lovers will be happy all year round, whether you are walking or canoeing, sleeping on your boat or in your hammock in a bivouac.

Biodiversity, flora and fauna of the park

In 2000, the Jaú Park was recognized as a World Heritage Site by UNESCO. The richness of the biodiversity, fauna and flora within the park has earned it this title. The park is located in the Central Amazon Corridor in Brazil, it is one of the most representative reserves of fauna and flora of Central Amazonia.

This protected area in the heart of the Amazon river basin will allow you to discover an abundant biodiversity, refuge of endangered species and hundreds of plant species.

The park has the particularity of being the only reserve that encompasses the entirety of an imposing river with a strong water flow, the Jaú River, with a length of about 450 kilometers.

The river system is characterized by black waters, the black coloring of the waters is due to the organic acids released by the decomposition of organic matter and the low content of terrestrial sediments. The Park’s rivers form a landscape of white sandy beaches in the dry season and flooded forests in the rainy season, with secondary beds of different sizes, channels, lakes, igapo, paranos (river arms separated from the main current by a strip of exundated land) and an important fluvial phenomenon, the ria, typical of all the large rivers of the Amazon.

The rivers, lakes, igapos and igarapés of the park contribute to the richness of the fauna and flora of the park. The algae produced in these ecosystems allow the formation of a food chain that includes fish, birds and mammals.
The biodiversity of the park is as rich as it is unknown, it shelters species still little studied by science.
A considerable number of species present in the park are present in the Brazilian list of species threatened with extinction. The park protects a typical Amazonian ecosystem that is threatened everywhere else in the region.

Within the park there are 400 different species of plants and 320 species of fish, some of which have not yet been recorded. The park is home to the greatest diversity of birds in Central Amazonia with more than 440 species, 120 species of mammals including the jaguar, the manatee (essential reference area for the study of the manatee in the Amazon), the giant otter, the pink Amazonian dolphin, the puma, the ocelot, reptiles including the black caiman. For all these reasons, the park is worth a visit.

Climate – Weather of Parque Nacional do Jau in Brazil

The climate is typical of that of the tropical rainforests. The rainy season is from December to April and the driest from July to September.
The climate is hot and humid, with an average temperature of 26 to 17 degrees and rainfall between 2000 and 22500 mm. This is the best time of the year to put on your itinerary and to do your tour and visit the park.