The Guardians of the Forest

More a dream and a civilization than an ethnic group. The Native Indians who survive by hunting in the reserves in self-sufficiency, those who bear witness to past civilizations, preserved thanks to oral tradition, those who speak to the wind and the forest, their existence is threatened.

The vast river basin of the Amazon has allowed the Amerindians to adopt a culture that is substantially similar and to nearly all share in a similar way of living. The differences between them are due to geographical location and the desire of the ethnic groups to differentiate themselves from each other.

The lush vegetation of the Amazon might lead you to believe that just by taking a stroll in the forest you will find an abundance of fruits, berries, game and fish. The reality is very different. The Native Indians have needed to have exceptional powers of observation to make use of their natural environment. The wealth of their botanical knowledge is of immeasurable benefit, but the fact remains that they are in a constant struggle for survival. The search for food remains their principal activity. Amerindians live off food crop production, foraging, fishing and hunting. Each activity is shared between men and women, and their schedule varies according to the seasons.

In the 16th century they numbered 6 million, and today less than 1 million remain. Their numbers have been decimated by gold and rubber prospectors, by flu, starvation, epidemics, tuberculosis, malaria that has arrived from the coast via insects that have slipped into luggage, measles, onchocerciasis and the mercury spilled into the rivers by gold mining practices.

The body tasked with protecting the Amerindian people, the FUNAI, which already had totally inadequate funding, has been increasingly left to go to ruin 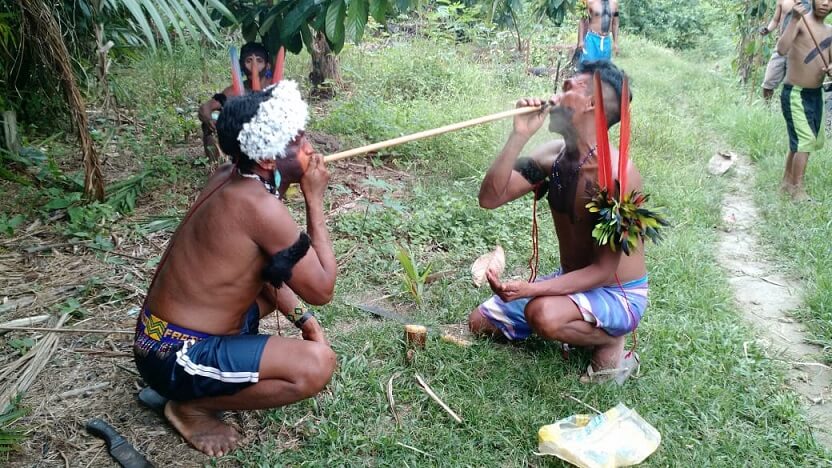 Discovered in 1800, to the west of Boa Vista, in the state of Roraima on the Venezuelan border. They are recognizable for the three fine sticks that they pierce around their mouths, their face paint and their haircut with bangs. They are semi-nomadic. They depend on hunting, foraging and manioc.
An increasing number of illegal gold miners are invading the Yanomami territory, which is rich in gold.
Politicians who take action to defend the Yanomami people are few and far between. The first indigenous woman to become a federal deputy in Brazil, Joênia Wapichana finds herself alone up against the government and the ruralist lobby who are determined to destroy the indigenous people and dispossess them of their land.

In the states of Mato Grosso and Para, in the heart of the Amazon Rainforest, the Kayapo territory can be found.
The Kayapo population is one of the 17 nations that live in the valley of the Rio Xingu.
Women and children live apart from the men: they have their own stories, their cries and songs, which differ from those of the men. The village chief coordinates all activity and passes on skills and knowledge to the youngsters. Their housing consists of rectangular huts built out of wooden logs and palm leaves, arranged in a circular camp. The village’s center, called the Ngab, is very important: the women gather there to organize the daily activities, and the men to talk about politics and make arts and crafts. The homes only contain hammocks and food supplies.
The Kayapo are the undisputed masters of feather headdress art. Through this art they express the importance of birds in their representation of the universe. 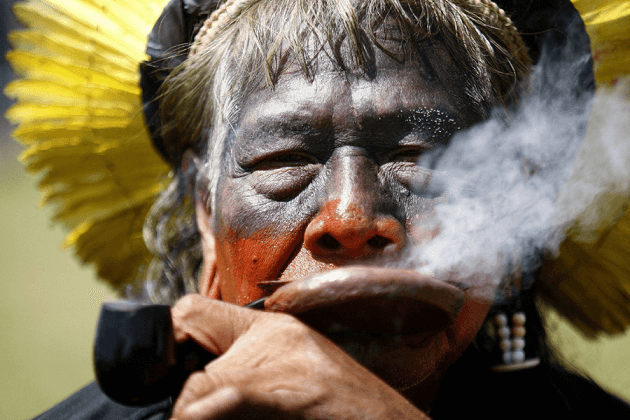 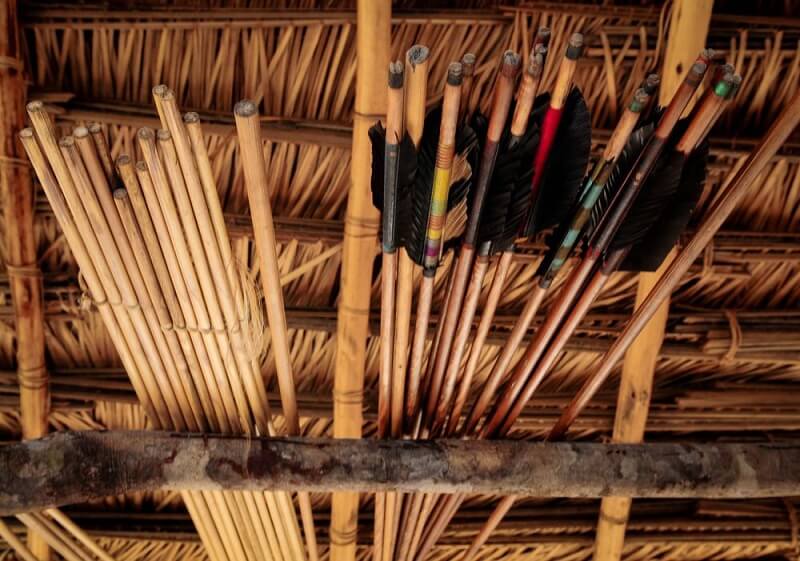 Clans of the same ethnic family as the Arawaks, with a strong influence from their Karib neighbors. In 1987 their population numbered 13,467, of which 5,730 were in Guyana and 7,737 in Brazil.
They share their lands with the Makuxi, who are based in the north and north-west of the Wapishana territory. In Brazil, in the state of Roraima, they rub shoulders along the Arraias, Surumu and Quitauau rivers and in Guyana in the region of Upper Takutu-Upper Essequibo.
They live in areas of savanna, rainforests and tropical dry forests. Their environment has been destroyed by extensive cattle ranching, the installation of barbed wire fencing and diamond mining, which creates ongoing tension with the big landowners who are exploiting the natural resources of their region.

The Wai-Wai tribe is part of Guyana’s Amerindian population. They are based in the most southerly region of the country. The Wai-Wai are known for being excellent hunters, weavers, farmers and fishermen. They hunt various animals, such as armadillos, deer, tapir, toucans…

The role of women is to weave seed necklaces and hammocks as well as making manioc graters and pottery. In the Wai-Wai culture, women have a very important role.

The popularity of the men depends on the quality of work their wife carries out and her fertility. Generally, marriages are between first cousins. According to the Wai-Wai, the yaskomo (shaman) is able to practice a ritual named “astral travel”, which consists in making the psychic body (the soul) leave the physical body. 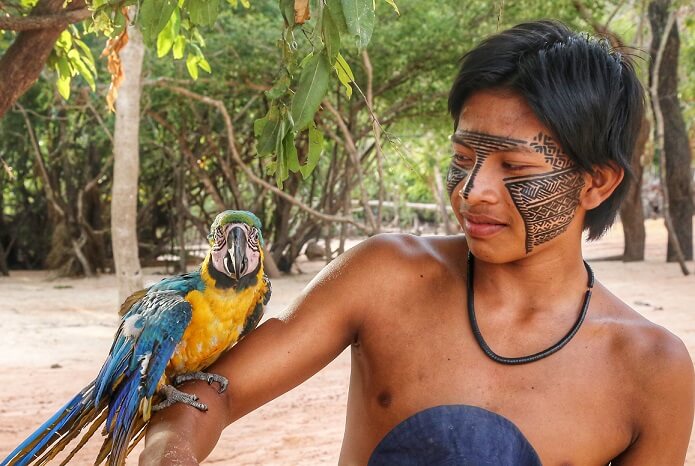 FUNAI manages the interactions of several hundred well-identified uncontacted tribes. There is a more or less regular contact with its representatives and ethnic groups that maintain themselves in voluntary isolation, of which there are about a hundred occurrences in Brazil, concentrated mostly in the Amazon. These “occurrences” range from very diffuse traces to photographic or aerial evidence of their presence. They are not always groups “living in the Stone Age without knowing that modernity exists”, but rather groups that have experienced contact with Brazilian society or some of its segments, and have concluded that it is better to isolate themselves in order to survive. They are aware of the societies that surround them, but prefer to remain isolated. Sometimes this isolation is relative, and discrete contacts (not always positive) exist with other Native American groups nearby.
During the construction of the Transamazonian Highway, in the 1970s, FUNAI launched a vast operation to contact many potentially affected peoples, with disastrous consequences, including the loss of at least a third of the population of the villages concerned in a few months and a process of cultural and social disintegration. Under the influence of several specialists in contact with isolated Amerindian populations, called sertanistas at FUNAI, including Sidney Possuelo, the policy was radically changed in the 1980s to a strategy of keeping these populations out of contact before they sought it themselves. Large territories are thus set aside as soon as reports of an isolated group’s presence are confirmed. In the case of the Piripcura, an area of 242,500 ha has been set aside for a group of two survivors who maintain a nomadic lifestyle. The groups in question sometimes end up seeking contact on their own, as was the case for the Korubo of the Javari Valley in the 1990s. Sometimes they maintain their isolation, such as the Moxihatëtëma of the central Yanomami territory.
The resources contained in these territories are, however, the object of covetousness and conflicts are therefore numerous. The Moxihatëtëma have a history of violent conflicts with the garimpeiros, who killed two of their own again in 2018. In Maranhão, the Awá face repeated pressure and attacks from ranchers who want to expand their territory and from foresters who come to plunder rare wood species. FUNAI or NGOs regularly divulge pictures showing their existence to put pressure on the government so that the territories concerned are better protected. The resurgence of large infrastructure projects could nevertheless severely threaten these fragile groups, supported by the government of Bolsonaro with his Minister of Environment Salles, who abolish all laws aimed at protecting the environment or the Amerindian peoples, aimed at evangelizing and acculturating them. Nearly 27 groups will be directly affected and exposed to unwanted contact if the projects under discussion are carried out. The price of an inevitable “progress”?